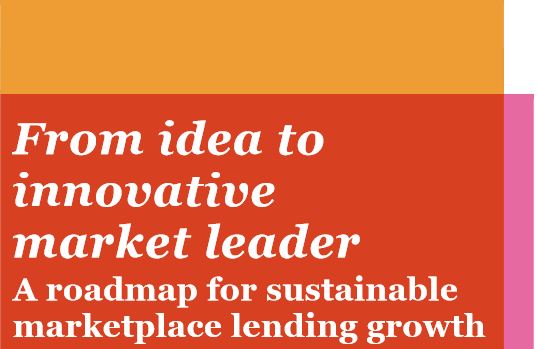 The buffeting that the alternative finance sector received from Adair Turner on the BBC earlier this year has been proceeded by a relatively quiet three months for the industry, in the press at least. In a sense, the furor surrounding a potential Brexit that will reach a peak in the next month or so has come at a good time - it has allowed peer-to-peer lending platforms to knuckle down and continue the sustainable growth of 2015 into 1H16. The unwelcome comments of the uninitiated are otherwise caught up clamouring “in” or “out”. However the sector has been affected by the unsettling of potential lenders who are nervously waiting to see what will happen before deploying more capital or their first capital in the sector.

Uncertainty is always bad for business at any rate, so the excellent “Roadmap for Marketplace Lenders” report published by PWC recently reminds us. The Roadmap should be seen as a welcome reminder to existing lenders who are starting to let their doubts creep in that the foundations in the sector are solid. The report can be found here- it gives a detailed guide as to how marketplace lending platforms have evolved, and the future for new entrants into the space. PWC attribute the success of any marketplace lender to four main pillars:

The report is specifically aimed at aspiring smaller marketplace lenders, however it contains industry insight that serves to highlight the benefits to anyone looking to start investing or lending over marketplace platforms as well. The key to the innovation in modern finance as a result of marketplace lending has been the ability of platforms to identify very specific niches as a focus, rather than act as what PWC calls a “single homogenous force” aiming to disrupt anything and everything. It is crucial that investors and lenders buy into the ethos that working with and alongside traditional forms of finance in a democratic fashion is exactly what “Fintech” is all about- the PWC report aptly emphasises this at length. It isn’t, as Turner would have you believe, a razzle-dazzle load of unregulated cowboys looking to make a quick buck by gazzundering the banks and taking advantage of naïve retail investors by lending to un-creditworthy borrowers.

A lot has changed since the early days of simple “peer-to-peer lending” that was pioneered by Zopa ten years ago. The name is still the moniker that platforms such as ArchOver are happy enough to abide by, alongside many others of course. Regretfully the terminology and nomenclature in the alternative finance industry can be confusing and worse still completely misleading. Partnering with institutional investors, and indeed the banks, on the same terms as the rest of the crowd is the true innovation. It has allowed everyday savers to avoid the complicated and risky world of stocks, shares and expensive wealth managers and give them the chance to take control of their savings and lend money alongside savvy funds, corporate and institutional investors at competitive interest rates. The PWC report may seem like it is stating the obvious, and to a certain extent so does this blog post- but in times of uncertainty it is the simple facts that need to be accentuated to reassure lenders and investors that alternative finance remains an attractive propositions.