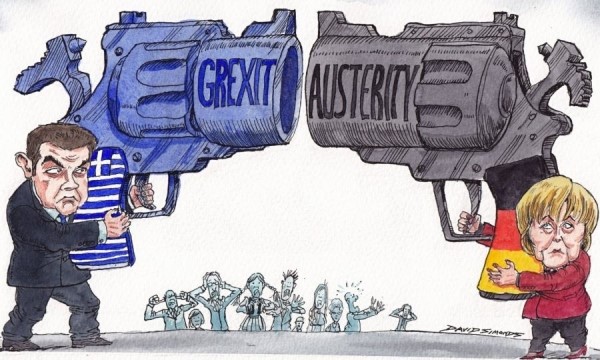 Greece is saddled with debts on a scale that, when compared with its GDP, no nation has ever repaid. There seem to be only two possible outcomes: default and become the new Albania (a country locked in isolation and spiralling into decline for the next 50+ years) or devalue.

When the Euro Zone was formed, the economies of the joining countries should have fitted within certain economic parameters; the failure to enforce stringent “convergence criteria” has come to haunt the Euro area, worsened by the economic calamities of 2007 / 08. Today, while the Greek economy is a basket case, it is perhaps most closely aligned with the economies of Italy, Spain, Portugal the Balkan members of the EU and maybe even France. The countries that are most clearly out of step with the economies of Greece and its neighbours are those of Germany, Holland, the smaller countries such as Luxembourg. Germany has been able to use the Euro’s weakness to export goods to the weaker European nations at cheap prices, but without much foresight into how they would recover the IOUs.

The European Coal and Steel Community agreement of 1952 is the cornerstone of the EU and the Euro Zone. It was ostensibly an agreement to prevent any further wars between France and West Germany. It achieved its primary objective, but it was far from flawless. The community had little effect economically; coal and steel production was influenced more by global trends. The crisis in Greece may yet prove that the European Union is inherently flawed from an economic standpoint; it remains to be seen whether its political advantages can help rescue the Euro Zone or prove so strong that it wrecks the whole European Project. Could the radical option of a German exit from the EU be the most sensible alternative solution? The theory is certainly not as stupid as the inevitable copy-cat portmanteau. 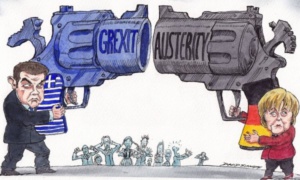 “Gerxit” might not only address Greece’s problems but also help many other countries begin to address their trade imbalances. As a soaring Deutsche Mark would make imports from Germany more expensive, other countries would be able to export at competitive prices. The cheap currency would make importing goods from the PIIGS (Portugal, Italy, Ireland, Greece, Spain) an attractive proposition, and prevent the need to cut high labour costs by reducing the minimum wage – particularly an issue in Italy. The PIIGS would grow at the same pace until it would be economically viable for Germany to re-join a balanced single currency. Germany, in the interim, would benefit from a strong and stable economy.

If Gerxit is the answer, it would require a huge expenditure of political will and a readiness, on the part of the Germans, to take the pain of a contracting economy. Merkel is not going to give up on the Eurozone just yet. And, aside from the political stumbling blocks, Gerxit has its fair share of economic barriers as well. In 2012 a Bertelsmann Foundation study found that leaving the European Union would cost Germany around 0.5 basis points of GDP percentage growth over a period of 13 years, or €1.2 trillion. An estimated 200,000 people would have to be made redundant. There would be trade slowdown as a result of currency conversion and exchange rate fluctuations.

But pondering the effects of Gerxit remains an academic exercise. For following considerable and far from unanimous debate, the Bundestag have decided to allow negotiations on a €86 billion Greek bailout deal, kicking the can down the road and probably the wrong road at that. At best, Judgement Day has been adjourned; Europe’s political and economic future again hangs in the balance and the UK remains disengaged. Even though the UK is outside the Eurozone, complete disengagement from next door’s crisis seems incredibly foolish. As the UK has little exposure to Greece it would be in a good position to broker a deal to resolve the crisis. Leadership, rather than intimidation and self-serving diplomacy, is called for.

I was recently reminded of a joke that alludes to the Germans’ handling of Greece’s fate as similar to the doctor who gave a patient six months to live. When the patient failed to pay up the doctor gave him six more months. Merkel has recognised that “death”, in this case, is the “chaos” of Grexit, a move that has next to no winners and millions of losers. Perhaps a more relevant cry would be “Physician heal thy self”.